Posted on August 23, 2015 by pamticeblog@gmail.com

On August 28, 1918, Maude Chase wrote a letter from her home in Evanston, Illinois, to the Bureau of Investigation, the precursor agency to the FBI that investigated real or perceived threats to the citizens of the United States. In her letter, Mrs. Chase said she felt it “her duty as a loyal American” to report that her Pleasant Point neighbor, Harry Rapp, might be a German spy. This may have been a sign of the times, as described further here, or she may have had a personal grudge, perhaps through her husband Edward’s property sale to Mr. Rapp.

In her letter, Mrs. Chase cited Rapp’s German ancestry, his having “plenty of money,” his fine auto and big motor boat, and his engine business “near the Boston docks.” He’d been overheard making “intensely pro-German remarks before America entered the war.” She said he was “well known in Boston, at least in certain circles,” and “a very intelligent, very cunning man” who would “not hesitate to do anything mean against the U.S. for Germany’s gain.”

He’d been overheard speaking to the local Catholic priest, Father Erkerling, although he (Rapp) was not a Catholic nor a religious man. Further, he came to Pleasant Point off-season, between December and March, while people visited normally only between May and October. She was concerned about his proximity to the wireless plant there. His brother-in-law, an associate in his business, had traveled to Tahiti Island to see if there might be business opportunities for their marine engine company there.

Mrs. Chase asked that her name not be used, as she expected to return to Pleasant Point the following summer.

The letter about Mr. Rapp appears to have caused an inquiry into activities of Father Erkerling as well, and an agent spent time in Wellfleet inquiring as to the priest’s activities. The priest also had a motorboat capable of going out to sea, and the agent wondered if information could be transferred this way to German ships. There was a report of the priest sending money to help certain refugees in Europe, as well as a report that he had been “seen at the monument in Provincetown.” The priest had been friendly to Rapp.

The six-page investigative report about Father Erkerling concluded that the suspicions about him were not of enough concern to continue. His case was helped by strong positive statements by Channing Cox, then the Speaker of the House of Representatives of the Massachusetts legislature, who spent considerable time in Wellfleet as he was married to a Wellfleet woman. (Cox’s residence is now Winslow’s Tavern on Main Street in Wellfleet.) The local doctor, F. S. Canedy, also spoke up supporting Father Erkerling. They cited his enthusiasm for the Liberty Bond Drive, and that his background as a Belgian immigrant was behind his sending money orders to Europe to help refugees of the war. These two prominent men appear to have offset a few others in Wellfleet who were either anti-Catholic or concerned that Father Erkerling was an immigrant. The fact that he had a Belgian refugee priest assisting him seemed enough to cause him to be lumped together with Germans.

What was happening at the Cape that caused such suspicion? In April 1917, Congress voted to declare war on Germany, a “war to end all wars.” This happened after three years of trying to stay out of the conflict, as many thought it was emblematic of the rottenness of old Europe. President Wilson had won re-election in 1916 by vowing to keep the U.S. neutral. But neutrality became impossible following German actions, especially the sinking of the British liner Lusitania in May 1915, when more than 250 Americans died, including one of the Freeman sons, Richard R. Freeman, from an old Wellfleet family.

The first American troops under General John Pershing arrived in Paris in the summer of 1917.

On the Cape and its surrounding waters, just like all the other U.S. wars, Cape Codders were affected by the declaration of war. German submarines attacked fishing boats randomly. In August of 1918, a group of Gloucester fishermen specifically identified a German sub commander as a skilled navigator who had fished the same waters as they did, and owned a home in Maine — he had returned to his country to help out them with the war effort.

In March 1917, the playwright Eugene O’Neill and his friend, Harold DePolo, were arrested on suspicion of spying for the Germans. The Provincetown Town Constable arrested them while they were having dinner at a Provincetown hotel. They had spent the afternoon walking near Highland Light where there was a U.S. government radio station, and were rumored to have the station’s plans in their pocket — an allegation later proven false.

In another Cape incident, Frederick Grigg of Newtonville, an amateur botanist, was taken into custody on a train between West Barnstable and Sandwich, but released after an examination in Boston. He had a notebook with strange numbers and letters and “government maps”— seen by someone — which turned out to be his botanical notes and field maps.

Finally, what may have truly shaken Mrs. Chase was the July 21, 1918, attack off Orleans. The French Cable terminated there and was used by General Pershing to communicate with Washington, D.C. The French sent a ship to guard the cable off Nauset Harbor. Besides breaking the cable, the German submarines dispatched to the coast were also part of a general campaign to disrupt the Atlantic fishing fleet.

On Sunday morning, July 21, a German submarine, U-156, fired upon a tugboat, the Perth Amboy, that was towing four barges. One of the barges, the Landford, loaded with granite blocks, sank. Some of the shells hit the East Orleans shore, thus making Orleans the only place in the U.S. to receive enemy fire during World War I. The Coast Guard launched a rescue boat to help save those aboard the tugs, and the Naval Station at Chatham sent two planes over, firing back at the sub, but their bombs were duds. Two of the surfmen who helped with the rescue were from Wellfleet, Ralph B. Cook (of the family that established Cook’s Camp’s that I’ve written about) and Zenas Adams. This incident truly brought the war “home” to Wellfleet. 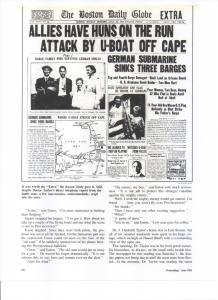 All of this submarine activity along the Cape Coast prompted President Wilson to declare on July 25, 1918, that the Cape Cod Canal would now be operated by the federal government.

Harry and Celia Rapp came to Wellfleet in 1908. The following year they purchased the largest of the seven cottages that line the bluff at Pleasant Point. The Queen Anne style on the western end was a rather grand structure for Wellfleet where cottage owners usually put up smaller wood-shingled structures with porches, and sometimes a little tower room. Their land had originally been owned by Ferdinand and Isabella (?!) Sage, and there are early references to a Sage cottage. But Isabella died, and Ferdinand sold a portion of his two lots to Mr. Lovering of Medford, Massachusetts, who was a contractor and builder. That may explain why he took on building such a large structure, floating the materials across the bay to Wellfleet.

The Rapp House is the Queen Anne on the far left

Soon after it was built, Mr. Lovering sold the big house to Edwin Paine. He was able to secure the remaining Sage property and sell both the house and a large lot to the Rapps in 1909. Harry Rapp may have been too much “fast company” for the other Pleasant Point residents. He owned Rapp-Huckins, specializing in gas engines, based in Boston at 47 Haverhill Street. He and Celia sometimes traveled across the bay to South Wellfleet by their fast boat. They did not have children and often spent the winter months in Florida. One news report mentions Alton Atwood, a local Wellfleet man, taking their boat down to Florida to meet them, heading down the coast and through the Inland Waterway, that small craft used to avoid the rough Atlantic waters.

Father Joseph Erkerling was a Belgian-born Sacred Heart priest who had been assigned to Wellfleet’s Lady of Lourdes parish. He was responsible for acquiring the land and constructing the parish’s new church and rectory on Main Street, 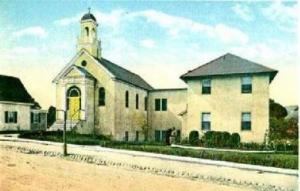 Our Lady of Lourdes as built on Wellfleet’s Main Street

dedicated in 1912. Father Erkerling also had a boat and had invited Harry Rapp to go fishing with him. The investigation of Erkerling, a fairly short report, cites this connection to Rapp as the reason why a file was opened on the priest.

The investigation of Harry Rapp, Case Number 277818, a “possible Hun spy,” was forwarded to the Boston office of the Bureau of Investigation. The report is a mix of reported conversations that Special Agent W. A. Winsor had with a variety of people about the possible sightings of the Rapps. Even little observations are written down, such as a comment by someone in Wellfleet, regarding the size of a boat, said “You should see the size of the one Rapp started for Florida in.” A fishtrap man in Sandwich had spoken with a man and a woman with a large boat near Sagamore Beach who said they were from Wellfleet and then headed off in that direction. Another noticed a man and a woman who’d slept “on a piazza” of a house near Sagamore Beach, leaving their boat anchored near the Canal, and then headed toward Boston. The same investigator handled the inquiries about Father Erkerling; while conversations did not identify those speaking with the agent by name, Channing Cox and Doctor Canedy were willing to be identified.

Nothing seems to have come of these inquiries. The Rapps continued to spend time at Pleasant Point and, in the late 1920s, sold their Queen Anne house to Carl Parks and his family, who owned it through the 1970s until it was purchased by its current owners. Rapp had bought a second property on the bluff at Pleasant Point, and he sold that one also, to the Downer family, who subsequently opened the Ma Downer’s restaurant in South Wellfleet.

The Rapps remained on Pleasant Point until they retired in the late 1920s when they bought a year-round home in Wellfleet’s center on East Commercial Street. Harry joined Wellfleet’s Masonic Adams Lodge. He served on the Wellfleet Board of Health, and worked with a committee of citizens concerned about repairing the clock dial of the Congregational Church—an upstanding citizen.