With great thanks to Chet Lay, Wellfleet Surveyor, who has provided a continual supply of information, books, and maps, increasing my appreciation of how we chart the land and its ownership.

This article shares a few observations on South Wellfleet’s position in the U.S. Coastal and Geodetic Survey made in the 19th century.

In 1807 President Thomas Jefferson requested legislation “to cause a Survey to be taken of the coasts of the United States.” Jefferson was just receiving first reports from the Lewis and Clark Expedition of the recently-purchased Louisiana Territory. Mapping the nation was on his mind, and the Survey was meant to promote trade and commerce by providing knowledge of the sea surrounding the new maritime nation, mapping the coast, reefs, fishing banks, and other submerged land.

Jefferson personally chose the first Superintendent of the Survey, an immigrant from Switzerland named Ferdinand Hassler, who was a mathematician and a skilled measurer. Hassler devised a plan to measure the seacoast by laying out a network of enormous 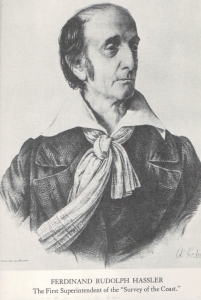 consecutive triangles, the sides of which ranged from ten to sixty miles. While the name

“Coast Survey” seems to imply that only water-covered areas were of concern, Hassler first created a Geodetic Survey, using the ancient science of geodesy that determined the precise location of specific points on the earth’s surface.

The Coast Survey project was the beginning of what has become the oldest scientific agency of the United States government, today housed at the National Oceanic and Atmospheric Administration. Surveying continues today. Prior to the Coast Survey, there was a publication for mariners called the American Coast Pilot, published first in 1796 by Edmund M. Blunt. Blunt’s eventually made an alliance to use the data of the Coast Survey. Eventually, in 1867, Blunt’s rights were sold to the Coast Survey.

Surveying began in the 1830s, but it took until the 1840s for Congress to fully fund the project and then to get it organized successfully. While Hassler is credited for laying out the scientific measurement technique, the second Superintendent of the Survey, Alexander Bache, is credited with organizing the topographical and hydrographical survey areas, and actually publishing the results so that the survey could become a useful tool. Bache, a great grandson of Benjamin Franklin and the organizer of a magnetic observatory in Philadelphia, was a scientific scholar himself, and had paid attention to the pursuit of science underway in Europe, bringing this knowledge to the fast growing United States.

Major James Duncan Graham (1799-1865) was the U.S. Topographical Engineer who directed what must have been early surveys of Cape Cod in 1833-35. He was a West Point graduate, class of 1817, as were many of the surveyors of the 19th century. The Navy 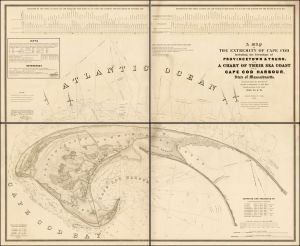 The extremity of Cape Cod

supplied trained officers who conducted the soundings that marked the coast to the three-mile limit. One of my favorite early Cape Cod maps is “A Map of the Extremity of Cape Cod including the townships of Provincetown and Truro and a chart of their Seacoast and of Cape Cod Harbour.” Major Graham’s name is on the attribution of the map.

The triangulation points on the first Wellfleet topographical map are labeled 1847, so we have a time frame for the creation of the map.

I recently discovered in a triangulation listing that the 1847 points are attributed to a T.J. Cram. Cram was Thomas Jefferson Cram, a West Point graduate of 1826. I can imagine Captain Cram and his team working his way through Wellfleet with his Photo Plane Table, their measuring device. This is a description Chet Lay gave at a talk at the Wellfleet Library in November 2014:

A plane table is a board placed upon a tripod, with a surveying instrument with a protruding scale rule which rotates with the line of sight of the transit. A sheet of paper is clamped onto the board under the instrument at the start of the survey. Instead of recording angles and distances in a notebook, one uses the scale rule and simply puts a pencil “x” on the sheet of paper where the shot was taken. At the end of the day, you have the survey already done on the sheet and you returned to your tent to ink the lines and add the annotations – very fast and efficient.

Cram was from New Hampshire. The principal of the Hancock Academy wrote him a recommendation for West Point, indicating that he had “many tokens of uncommon genius.” As a Lieutenant, Cram taught mathematics at West Point in the 1830s.

I could not find anything further on Cram’s assignment that would have brought him to Wellfleet to lead the project as the Topographical Engineer. He is given attribution on other maps that include the Cape, including an 1857 Coast Chart Number 10 where he is listed as having authored the triangulations. Captain Cram had a distinguished career during the Civil War, and emerged a General. He died in Philadelphia in 1883.

On that 1857 map, the hydrography was under the command of Lt. Stellwagen and others of the U.S. Navy. Lt. Stellwagen mapped what was eventually named for him, the Stellwagen Bank, at the mouth of Massachusetts Bay, in 1854. Portions of the Bank were known long before, but the Lieutenant mapped the entire geological feature and its surrounding waters. 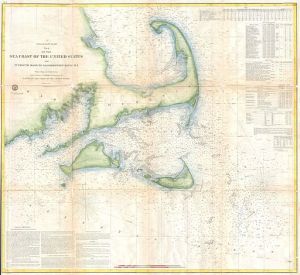 It must have been exciting to have this important government project underway in Wellfleet, making the isolated town seem more connected to the country. Henry David Thoreau mentions the survey several times in Cape Cod, mentioning Major Graham in his chapter about Highland Light. Thoreau himself had just finished teaching himself surveying skills prior to his Cape walk in 1849. He noted “Lombard Head” on his version of a Cape Cod map that has a visual connection to the Coast Survey map of the Cape. (It was this designation that alerted me to other triangulation points in South Wellfleet.) When Thoreau visited the Wellfleet Oysterman, John Newcomb, the conversation includes a story of how the surveyors consulted Mr. Newcomb for the names of numerous fresh water ponds in North Wellfleet, and how he told them of one pond they had not detected.

The “Lombard Head” triangulation point is in the area of the early 20th century development laid out by Arthur Buffam, which he labeled “Wellfleet-By-The-Sea.” The development was on both sides of Ocean View Drive, near Cahoon Hollow, and today is within the Cape Cod National Seashore. Buffam bought the land from the Crowell family in 1915. The Crowells had purchased it from Mary Saunders, whose grandmother was a Lombard, and perhaps gave the Lombard designation to the land earler. Another tracing of the land, through deeds, and family through genealogical charts, led me to Lombards married to Covell family – a piece of this land was bordered by “Solomon Covell’s Way.” While I can’t make an exact match, there’s some evidence that Lombards owned land in this part of eastern South Wellfleet, most likely wood lots, since no one wanted to live near the ocean at that time.

Another family-named triangulation point was “Hamblin’s Mound” over in western Wellfleet, in the area of today’s “Newcomb Heights” just north of Old Chequesset Neck Road. Chet Lay told me that when the area was under development in the 1960s, one of the 1847 markers was uncovered. It is a clay, four-sided pyramid-shaped piece with “U.S.” on each side. A search is underway to find out where it exists today.

In 1887 there were two points added: “Rich” which must have been near land owned by the Nepthali Rich family, and “Gull Pond,” which was located on Gross Hill.

In 1909 additional points (or stations) included the Marconi Tower, Mayo Beach Light, and “Chequesset Tower” which was a 25-foot tower on a sand hill just north of Chequesset Inn, a wind-driven tower contraption for pumping water for the Inn, with the water storage tanks for the Inn located just to the south of the tower.

In South Wellfleet in 1909, the surveyors were also using the cupola of a home on “the north of Blackfish Creek on a hill at the edge of the timber line” — which I’m sure was the large house built on Indian Neck by the Crowell family. In addition, there was “an old tripod signal on Lieutenant’s Island, marked by an old stake.”

Triangulation in Massachusetts, Volume 4, a publication by the U.S. Coast and Geodetic Survey, 1922

Breveted Major James Duncan Graham of the US Army’s Corps of Topographical Engineers issued A REPORT UPON THE MILITARY AND HYDROGRAPHICAL CHART OF THE EXTREMITY OF CAPE COD: INCLUDING THE TOWNSHIPS OF PROVINCETOWN AND TRURO, WITH THEIR SEACOAST AND SHIP HARBOR: PROJECTED FROM SURVEYS EXECUTED DURING PORTIONS OF THE YEARS 1833, 1834, AND 1835 (United States. Topographical Bureau; this included a map of Provincetown and Truro).

1 Response to South Wellfleet and the U.S. Coast Survey