The Story of the Paulmino

Posted on August 24, 2014 by pamticeblog@gmail.com 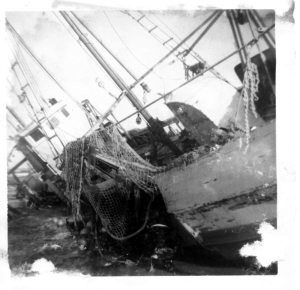 The bottom of the sea is strewn with anchors, some deeper and some shallower, and alternately covered and uncovered by the sand, perchance with a small link of cable still attached, — to which where is the other end? Henry David Thoreau, Cape Cod

The remains of the trawler Paulmino were uncovered again this spring 2014, on the Back Shore near the Cook’s Camps beach, about one mile north of Marconi Beach. David and Laurie (Cardinal) Sexton told me about its re-emergence, and about their arrangement with the family of the ship’s Captain, Angelo Marino. Captain Marino lost his life that night in April 1959. His family visits the site, especially when the remains of the wreck are uncovered. Captain Marino’s wife, two sons and two daughters, have visited the site as a way of remembering their husband and father.

So many shipwrecks on the outer Cape are just names and numbers, but this one — even though it is over fifty years old — is still in a family’s memory. In 1959, the Marino family had just re-located from Boston’s North End, to Everett, where they purchased a home. The children were then 11 months, 7, 12 and 15 years old. Mrs. Marino had planned to meet her husband upon his return so the family could attend their older daughter’s First Communion together. Instead, on that tragic weekend, their lives changed forever.

Angelo Marino was a member of the Italian community of fishermen of the North End, many with roots in Sciacca, Italy. Today, the neighborhood still celebrates its Sicilian heritage with an annual Fisherman’s Feast of the Madonna Del Soccorso di Sciacca, now in its 104th year. As an up-and-coming young fisherman, Angelo Marino had recently bought the Paulmino, and in April 1959 was on his second voyage. Of the six other men on board, four were pulled from the surf and saved.

On April 4, 1959, the eighty-three foot Paulmino, loaded with fish from Georges Bank, and on its way back to Boston, ran aground in fog and heavy surf a half mile from shore at 1 am. The ship was able to send one distress signal before it lost its radio. Its radar was out of commission. At daybreak, the crew felt the ship breaking up and decided to swim to shore. Two later reported saying the Rosary as they struggled to reach the beach.

The Coast Guard was aware that the ship was in peril, and had dispatched beach patrols. One patrol stopped at the Cardinal’s home at Cook’s Camps, near LeCount Hollow. Laurie Cardinal was 12 years old, and remembers the 5 am event. She accompanied her father and mother down to the beach where they and two Coast Guardsmen managed to pull four men out of the surf, wrap them in blankets, and get them warmed up.

The four survivors were taken to the infirmary at Camp Wellfleet for a while, until they could be moved to a hospital in Boston. The bodies of the two drowned seamen, the cook and a crewman, were recovered. But Captain Marino’s body was missing. Fortunately, it was recovered two days later, on April 6th, after the Coast Guard had kept up a steady jeep patrol on watch.

The Cape Codder covered the event in 1959 when it happened, and again in 1995 when the wreck was uncovered. Laurie and David welcomed a Marino daughter on a searching visit a few years ago, and were able to share Laurie’s recollection of the event, and point out the actual place on the shore. Those of us who know the Sexton’s golden retriever, Stormy, have heard the story of how he sat with the young woman on the edge of the shore, somehow understanding that she was mourning her lost Dad. 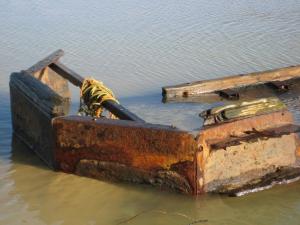 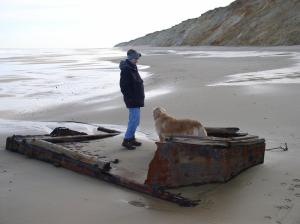 The Cape Codder, on line through the Snow Library

1 Response to The Story of the Paulmino