When I was very young, our Prospect Hill cottage did not have electricity. Mr. Rose, the iceman, brought blocks of ice for the ice box. We had a kerosene stove. We used an outhouse. When darkness fell, the oil lamp was lit, and we kids were required to sit quietly and play a board game at the table, or read a book, until it was time to go to bed.

We pumped our water as my mother and her family had done from the time the cottage was built in 1910. The pump was on the porch, and there was a big galvanized tub underneath it, ready for washing a child. There were two enamel pails next to the kitchen

sink; it was my older brother’s chore to keep them filled. An enamel dipper was always there for a delicious drink of cold water. (We ran around the hill all summer, making up our own games — no one worried about where we were. A whistle was blown to round us up at lunchtime.)

Recently, I was perusing a 1971 Earle Rich article in a Cape Codder newspaper, now digitized by the Snow Library in Orleans. He was writing about the town pumps around Wellfleet —the one at the corner of Commercial and Bank Streets that was well-photographed in its time. He mentioned one at the intersection of Main Street, Holbrook Avenue and Briar Lane, near what once was the Wellfleet Elementary School on that corner. Mr. Rich attended that school and remembered how handy the pump was for a thirsty student. That pump is today on the former Biddle property on Bound Brook Island.

I placed on my blog post on the General Store. The Town Meeting had voted to “remove and discontinue” the pump in 1932. According to Rich, this one was moved to the American Legion Hall, now the Left Bank Gallery, on Commercial Street. Sometimes I take photos of the flowers in front of the Gallery and here it is from an early 1990’s shot.

Mr. Rich wrote about something I’d been wondering about as I look at old photos of South Wellfleet, particularly the one pictured here of Stubbs landing, near where the County Road crosses Blackfish Creek. This shows a windmill in use, with a big cistern for holding the water. Now I know this structure was pumping water. Mr. Rich says that this was pretty popular around the turn of the century. It must have made the housewives happy on wash day. 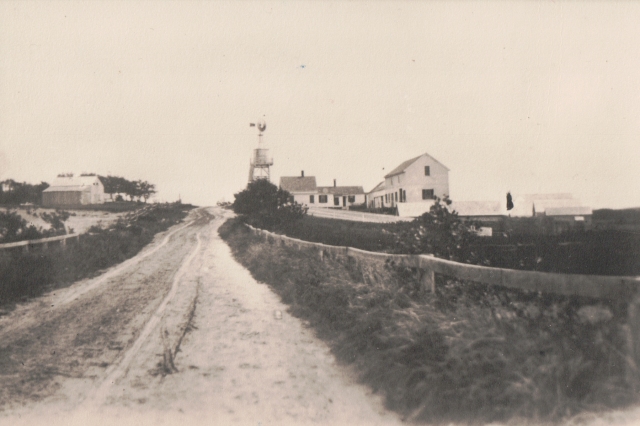 Soon, another pumping mechanism was introduced, a small, kerosene pump which, he says, was very difficult to start up in the morning. Finally, after electricity came to Wellfleet in 1927, pumping became an electrical job — and turning on the faucet a simple task.