Posted on January 16, 2013 by pamticeblog@gmail.com

In May 1901 an article in the Barnstable Patriot reported that a wireless telegraph system was underway in South Wellfleet, describing it as a “plant” that would operate the Marconi system “…by which signals can be exchanged with passing ships.” Marconi and his engineer, R. N. Vyvyan, decided to build a structure that would duplicate the structure at Poldhu, an antenna system of 400 wires suspended in a vertical cone from a 200 foot circle of twenty 200-foot-high masts. Vyvyan stayed in South Wellfleet to oversee the construction.

Vyvyan claims in his later accounts of his work with Marconi that he had doubts about the design, but was ordered to build it. Most accounts of Marconi’s work tell that the local people warned that the masts would blow down in the next nor’easter. Vyvyan also reports that he had trouble with the locals people since too many came to watch the work at the construction area. He had to build a fence to keep them to hold them back.

While building the station at South Wellfleet was underway, Marconi continued testing from Poldhu, and a test between there and Ireland prompted him to find another North American landfall. He traveled again across the Atlantic, and was welcomed in St. John’s, Newfoundland — at that time an English colony, not a province of Canada. He assembled a receiver at Signal Hill in St. John’s, the site of the final 1762 battle culminating in the French surrender to the British.

On September 17, 1901, the ring of masts at Poldhu collapsed during a storm. A few weeks later, on November 25, the South Wellfleet masts went down, as the locals had predicted. Marconi was told that it would take three months to rebuild Poldhu, but he got it done in

just two months by devising a simple aerial that worked. Marconi was struggling at St. John’s as well, raising a kite there to hold the antenna aloft. Fortunately, this worked for a short time over a few days.

On December 12, 1901, Poldhu sent a signal to St. John’s in Newfoundland, a simple Morse code “S” of three clicks. This was done in daylight, before Marconi learned that longer distances could be covered better at night. There was no independent confirmation, and some press coverage raised doubts about his accomplishment.

Nevertheless, as press accounts of Marconi’s success spread throughout North America and Europe, the Anglo American Telegraph Company sent a stern warning to Marconi that they had a negotiated agreement with the government in Newfoundland providing them a monopoly on the telegraph business, going back to the time in the 1850s when the cable

had been laid. Marconi knew of this monopoly, and had initially claimed he was experimenting with communications between ships at sea. At this point, the Canadian government stepped in and offered Marconi a place and funding to continue his North American work.

The Canadian Marconi site was in Glace Bay on Cape Breton Island in Nova Scotia. Like the site in South Wellfleet, Glace Bay was elevated providing an unobstructed view out over the ocean. In 1902, the Marconi team worked on both Glace Bay and South Wellfleet construction. On December 12, 1902, the first radio message to cross the Atlantic from west to east went out from Glace Bay.

Reconstruction in South Wellfleet began in 1902. The plan called for a staff living quarters, a boiler room to produce steam to generate electricity, a separate equipment room to concentrate power and produce a spark (South Wellfleet was a “spark transmitter”), and a 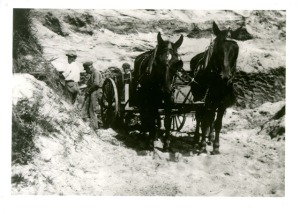 room for operators to send and receive messages. Newspaper accounts reported that fifteen cars of “Oregon pine” for construction were sent to South Wellfleet on the railroad — that must have been an exciting day in the village!

The most visible part of the South Wellfleet station was the latticed towers of red-painted wood. The towers were set at the corners of a square with 200-foot sides. Each 210 foot

tower was 24 feet square at the bottom and eight feet square at the top. Each was set into a four-foot-thick slab of concrete. Twelve steel cables secured each tower against the high winds on the dune. The aerial rigging was a conical arrangement of 200 wires converging in midair just above the transmitter house and feeding-in through a single wire.

When Marconi came to South Wellfleet to check on construction work, he stayed at the town’s only hotel, the Holbrook House.  His daughter’s account of his time in Wellfleet recalls that he disliked the food served there, and would import his own food and wine from Boston.  Another account of his visits to the Cape was in a newsletter about the Hopkins family history, where a boy who grew up in Truro remembered the visits from Marconi to his mother’s boarding house on weekends. Marconi would get a horse from the livery stable next to the Holbrook House, and travel to Truro because this woman knew how to prepare Italian-style food. And, despite her daughter’s membership in the Women’s Christian Temperance Union, she allowed Marconi to bring wine to the table for his own use.

Later, after living quarters were ready in South Wellfleet, Marconi stayed there and presumably had his desired food and wine waiting. In the photo shown here, the living

quarters had a piano which Marconi had brought in, as he enjoyed an evening of music.

Now we move on to January 1903 as Marconi and his team prepared to actually use the South Wellfleet station. The story of the days leading up to the transmission was captured in a 1915 article in The Wireless Age by Frank Stockbridge, a journalist who was assigned to follow Marconi that month. Stockbridge worked for the New York Morning Journal, a Hearst newspaper. William Randolph Hearst wanted to be the first to send the message to England, to the editor of the London Times. Stockbridge was assigned to make this happen. He left on a train from New York on a Wednesday, and by Friday he arrived at Sydney, Cape Breton, fifteen miles from Glace Bay, where Marconi was working.

Marconi invited him into the wireless room there, telling him to stay two-feet away from the apparatus — because sparks jump – and to put his fingers in his ears.  Stockbridge wrote, “ …the noise was like a machine gun firing, continuously“ and “High sparks jumped from the knobs of the immense Leyden jars that filled the center of the room.”

Marconi spoke about the day when all ships would be equipped with wireless and able to summon help immediately. Stockbridge asked Mr. Hearst’s question about sending the message, and Marconi did not say “no,” but indicated he might agree “…unless President Roosevelt wants to send a message to the King of England.”

Stockbridge filed a 5000-word interview, using the telegraph line from Sydney to the Morning Journal. Marconi loved the story. He invited Stockbridge to travel with him to the Cape – they went by train – and the other Boston reporters on the last leg of their journey thought that Stockbridge was Marconi’s secretary.

When they arrived in Wellfleet, the staff living quarters was occupied by Marconi’s engineers, and Stockbridge had to go to the hotel – presumably the Holbrook House.  Stockbridge indicates that there was only one telegraph operator in Wellfleet, and that man was also the station master, the freight agent, and general man for all work. Unfortunately, news dispatches were too much for him – he was used to ten-word messages. (The Degna Marconi book puts the telegraph in the hands of Mr. Swett in South Wellfleet, but all other accounts have the messages sent from the Wellfleet Railroad Station’s telegraph office.)

The only public telephone was in the Wellfleet post office, and Stockbridge convinced the Postmaster — who was Everett Nye at that time — to give him a key so he could make calls at night when other newsmen could not hear him. Talking to New York proved to be an impossible distance, but he could get through to Hearst’s Boston paper, and then they would send a telegram to New York for him.

After spending a week or so in Wellfleet, Marconi sent for Stockbridge on a windy evening and told him that the message was to be sent that night. Now it had been decided: the Roosevelt message would be sent first, and a second message would go from William Hearst to the London Times.  However, I could not find anything further about the second

old print of Marconi Bungalow taken from a height, no ID

message. Stockbridge returned to his spot by the public telephone, and Marconi called him — there must have been a phone at the Marconi station – and Stockbridge scooped the other reporters.  Since this was a memory piece, written many years later, some of the details may be unreliable.

Marconi’s daughter, Degna, also wrote about that night in her 1962 book My Father, Marconi.  The message was planned to go to Glace Bay in Canada, and directly to Poldhu.  On the night of January 18, between nine and eleven o’clock, it was sent:

His Majesty, Edward VII, London, England.  In taking advantage of the wonderful triumph of scientific research and ingenuity which has been achieved in perfecting a system of wireless telegraphy, I extend on behalf of the American people most cordial greetings and good wishes to you and all the people of the British Empire.

To Marconi’s great joy, the message was received in England directly and a return message

Composite view from old poster made by H.R. Hicks
displayed in QST Magazine

sent from the King:

To the President, the White House, Washington, America: I thank you most sincerely for the kind message which I have just received from you through Marconi’s transatlantic wireless telegraph. I sincerely reciprocate in the name of the people of the British Empire the cordial greetings and friendly sentiment expressed by you on behalf of the American nation, and I heartily wish you and your country every possible prosperity.

The reportage of the Marconi accomplishment also includes the story of Charlie Paine, who stayed at the South Wellfleet station through the evening, wrapped in a warm coat and with blankets on his horse, Diamond, until Marconi appeared in the doorway with the two

envelopes containing the messages to be telegraphed to Washington and New York.

To capture the Cape Cod spirit, the story also  tells of Marconi urging Charlie to make his horse fly like the wind to the Wellfleet Telegraph office, and how Charlie slowed down as soon as he was out of sight, illustrating the general Cape Codder skepticism about the Marconi venture. Charles Paine was over eighty when the South Wellfleet Neighborhood Association was formed in 1937 — and their promotion of him as a local character helped to fix his reputation.

Degna Marconi’s account also mentions the flood of messages to the Cape following the transmission. The King of Italy sent a half-page of congratulations, via the Provincetown telegraph office, and they transmitted it to the South Wellfleet Little Store where the “fatigued storekeeper and his pretty clerk had been standing by the wall telephone with a pencil in hand trying to take down the names of men of importance. It was stunning to contemplate.”

Frank Parker Stockbridge “An Adventure in Wireless in Popular Electricity and the World’s Advance, March 1915

Marconi, Degna, My Father Marconi, on line at www.archive.org

1 Response to Mr. Marconi Builds His Station in South Wellfleet